Medicinal Mushroom Microdoses assisting in connecting of Heaven and Earth

CONGRATULATIONS!
YOU ARE AWESOME

You have found a key to unlock your greatest desires, and  taken the first steps
towards Atma Prema (Sanskrit): UNCONDITIONAL SELF LOVE.

SUPREME MICROS has formulated the most advanced protocol for your IMMUNITY, LONGEVITY and PEACE of MIND.

A proprietary blend of 13 of the highest vibrationally sourced organic mushrooms available anywhere and, in addition, baby pine needle sprouts. A supreme formula for everyone. 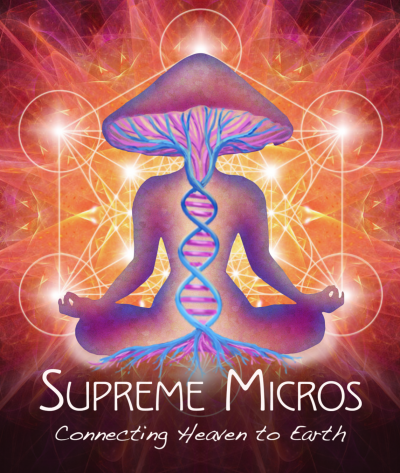 MUSHROOMs
and the connection to everything…. Mushrooms have been consumed since earliest history; ancient Greeks believed that mushrooms provided strength for warriors in battle, and the Romans perceived them as the “Food of the Gods.” For centuries, the Chinese culture has treasured mushrooms as a health food, an “elixir of life.”

They have been part of the human culture for thousands of years and have considerable interest in the most important civilizations in history because of their sensory characteristics; they have been recognized for their attractive culinary attributes.

Nowadays, mushrooms are popular valuable foods because they are low in calories, carbohydrates, fat, and sodium: also, they are cholesterol-free.

Besides, mushrooms provide important nutrients, including selenium, potassium, riboflavin, niacin, vitamin D, proteins, and fiber. All together with a long history as food source, mushrooms are important for their healing capacities and properties in traditional medicine. It has reported beneficial effects for health and treatment of some diseases.

Many nutraceutical properties are described in mushrooms, such as prevention or treatment of Parkinson, Alzheimer, hypertension, and high risk of stroke. They are also utilized to reduce the likelihood of cancer invasion and metastasis due to antitumoral attributes.

Mushrooms act as antibacterial, immune system enhancer and cholesterol lowering agents; additionally, they are important sources of bioactive compounds. As a result of these properties, some mushroom extracts are used to promote human health and are found as dietary supplements.

Directions: Six week protocol (60 capsules) Take one large capsule and one small capsule daily for five days in a row. Take two days off then resume five days and repeat. Repeat protocol as often as needed.

Pine needle sprouts, Pinus washoensis young sprouts are harvested fresh, dried on low temperatures to preserve the life force and enzymes and powered via a special method that keeps the life force intact. Rich in shikimic acid,vitamin c and micronutrients.

There is much to learn from “stacking“ combining psychedelic and non-psychedelic substances. The synergy of nutritional supplements (i.e. food) is better combined with other high vibrational modalities and protocols. To enhance your existing cognitive capabilities, recovery from stroke, and traumatic brain injuries, and strengthening areas if some functions are lost or decline.

It works to heal neural pathways in brains that are fatigued from depression, anxiety, PTSD, OCD, chronic pain, and other mental health conditions.

is the ability of neural networks in the brain to change through growth and reorganization. Some benefits are the ability to learn new things.

Benefits and or conditions that are most common reported